This book is vintage Cahill: witty, provocative, and probably over-sexed. I have to give him credit–Cahill is a competent scholar and he does cover the relevant topics.  He covers the “Greek” outlook on poetry, war, partying, and philosophy.  There is some oversimplification, but that can’t be helped.

His first few sections retell the Homeric stories.  Some parts are interesting but if you have already read Homer, there isn’t much to add.  (Sidenote:  Reading this chapter along with the relevant section in C.S. Lewis’s Preface to Paradise Lost shows one the utter despair of the Greek world).

The section on philosophy was neat, but again if you have read the relevant material (Plato et al) it reads like a summary. 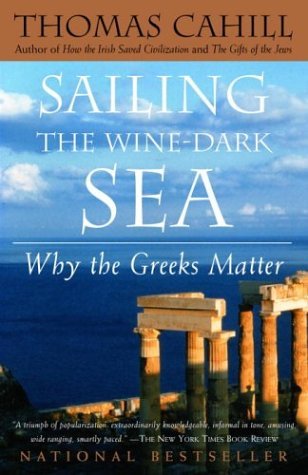 As to be expected, his most notorious chapters deal with sex.  I guess it isn’t as graphic as one would expect from Cahill and some sections really do illustrate the Greek outlook on relationships.  Cahill is correct, for example, that the Greeks didn’t see homosexual relationships as denoting a sexual preference called “homosexuality.” Nor was their penchant for pederasty one of forced relations, or so they thought.  The boy was to be wooed.  (The “call girls” at the Symposia were probably not given that option (Cahill 97-98).)

Cahill observes: “To represent ancient Greece as a homosexual society is to miss the central lesson.  It was a militarized society that saw everything in terms of active and passive, swords and wounds, phalloi and gashes” (134).  Certain members of society (aristocratic males and boys) were not allowed to be made into passive receivers.  Of course, that didn’t apply to lesser classes.

(In any case, one surmises that St Paul’s condemnations would apply regardless of labels or orientations)

Cahill points out something that should have been obvious but wasn’t: if you look at a lot of representations of Greek sexuality (I know, vulgar) you will note that the positions are always variants of some rear-entry position.   Cahill suggests a reason for it:  sex in a position that implied face-to-face presupposed a value of communication and mutual unity.  These ideas had no place in the Hellenistic world.  (Side note:  I am not saying that these various “positions” are right or wrong. Cahill is simply making a point).   Those who know the history of Trinitarianism will see something else:  the ancient Greek world really didn’t have a concept of “Person” as we have it today, a turning of the face towards another’s face.

Should you get the book? I don’t know.  Aside from Cahill’s asides (which are always interesting), I didn’t learn anything.  If you are familiar with Plato and Homer, I don’t see what this will offer you.

One thought on “Sailing the Wine Dark Sea”