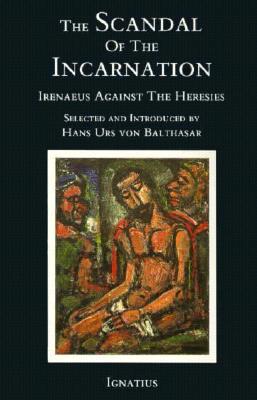 (1) Unity of Old and New Testament: God’s Logos.
(2) The crossbeams are the world’s true center–it is here where creation is renewed (13). The four points of the cross match the “four corners/dimensions” of the world (Irenaeus 16).

By God’s simplicity, Irenaeus means he is non-composite. God is “wholly mind, wholly thought, wholly reason, wholly hearing, wholly seeing” (Irenaeus 19, quoting AH II 13, 3). Since God is rational, he produces things by his Logos and orders them through his Spirit. The Spirit manifests the Word (Defense of Apostolic Preaching, 4-10). God’s thinking is His Word and the Word is Mind (AH II.28.5).

God is not a Groundless Void, for where there is a Void and Silence, there cannot be a Word (II.12.5). Irenaeus offers several reductios: can a void fill all things? How can he be a spiritual being if he does not fill all things? (II.13.7)

“He is rightly called the all -comprehending intellect, but he is not like the intellect of man. He is most aptly called light, but he is nothing like the light we know” (AH II 13, 3). God confers proportion and harmony on what he has made (II.25.2).

“The second Adam is the repetition, in divine truth, of the first Adam…The second Adam repeats the whole natural development of man at the higher level of divine reality” (von Balthasar 53). Indeed, “what was bound could not be untied without a reversal of the process of entanglement” (AH III.22.4).

(Redeemed) Man is body, soul, and spirit (AH V.6.1). Without the spirit man may have the image of God but not his likeness. The Spirit saves and forms the flesh and the soul finds itself mid-point between the two. The breath of life (ruach) is not the same as the life-giving Spirit (1 Cor. 15:45). The former makes man a psychic being; the latter makes him spiritual (V.12.2).

I think this is the best entry point for Irenaeus. True, the complete text of Against Heresies (such as it is) is too important to ignore, but most beginning readers will get lost in the Gnostic genealogies. Until, of course, one sees their modern counterparts, listed below:

Gnosticism today:
(a) Hegelianism
(b) Marxism
(c) Idealism
(d) Romanticism
(e) Freemasonry
(e) The American University System
(f) Hollywood (the symbolism is there, if you know where to look)

3 thoughts on “The Scandal of the Incarnation”