Old review.  I am just moving it to this site.

This is one of those “game-changer” books.  Beeke provides decades of pastoral reflection from the Puritans (and admittedly, there is a lot of repetition) while Jones brings clear Christological reflection from giants like Thomas Goodwin and John Owen.  The book is structured around the standard loci.  While we perhaps would like more from some chapters, the overwhelming amount of primary sources, and the clear mastery of secondary literature, allows us to continue the research if necessary.

My review will reflect my biases and what I like to study.  That can’t be helped, otherwise an exegetical review of this book would take ten pages.  This book is a Christological masterpiece.  I learned more from the chapters on Christology than I did in my week-long seminary class on Christology.  I agree with Carl Trueman, this book is both doctrinal and devotional.

In regard to the end, Goodwin viewed mankind as unfallen in His election of human beings, but fallen in His decrees as the means to that end” (155).

“Means” — what Christ, as redeemer of God’s elect, performed for his people.  It has reference to Christ’s redemptive work, which presupposes a fall.

Key point: “whether God’s decree regarding both the end and the means was pitched ‘either wholly upon man considered in the mass of creability [potential human beings] afore the Fall, or wholly upon the mass of mankind considered and viewed first as fallen into sin” (Jones, quoting Goodwin 156).

The decree to elect falls under a twofold consideration: a) regarding the end, the fall was not a necessity…but an impediment; b) the decree to elect may be understood also with respect to man fallen, which God foresaw, as the means.

Election has reference to the end.  Here God decrees to give men eternal life without consideration of the fall.  But when we look at predestination, we view man as fallen.  Predestination involves the means to the end.

(1) CoR sprang from grace in both parties (Father and Christ), whereas the CoG sprang from grace only from the Father.
(2) Though both are everlasting, only the CoR is eternal.
(3) The parties in the CoR are equal; the parties in CoG (and CoW) are not.
(4) The parties differ in both covenants.
(5) There is no mediator in the CoR
(6) The promises of the New Covenant (such as a new heart and forgiveness of sins) cannot be applied to Christ.
(7) Christ was not threatened in the CoR, whereas those in the CoG are (Heb. 2.3; 1 Cor. 16.22).
(8) The conditions in each covenant differ.
(9) The CoR did not require man’s consent.

On Coming to Christ

The chapter on preparationism, while correct in rebutting the “Calvin vs. Calvinists/Preparationists” thesis, didn’t quite address the reality of those covenant children  who hear the covenant promises from earliest days and trust in the Christ of these promises, yet don’t appear to go through the preparationist stages.

Owen on Justification and Union

For Puritans like Owen and Goodwin, there is a Three fold union

Christ “apprehends” and gives his Spirit to the believer.

Owen: Christ is the first and principal grace in respect of causality and efficacy” (20:150). Union is the cause of the other graces.  It is the ground of the imputation of Christ’s righteousness to believers.  Such is the logical priority of union regarding justification.  The act whereby Christ unites himself to the elect is the same act whereby he regenerates them (3:464).

Witsius: the elect are united to Christ when his Spirit takes a hold of them and infuses a new principal of life.  Yet, there is a mutual union whereby the soul draws near to Christ by faith only.  From this follows the other benefits of the covenant of grace.

This review did not cover all, or even much of the book.  Indeed, it could not.  But not only does it encourage you to read the Puritans, it points one to a number of crucial studies on the Puritans.

Most people never realized encyclopedias could be fun to read. In many ways, if the reader knows how to approach it, this book has the danger and thrill associated with the English Civil War.

I think it is safe to say that Beeke leaves no Puritan behind–even the ones you’ve never heard of and whose writings will never be published. But some chapters are truly good, and there are some Puritans who get center stage: Thomas Goodwin, Richard Baxter, Jonathan Edwards, Solomon Stoddard, the Mather Clan, and more.

Each entry is usually between 4 to 8 pages long. The first 60% of each entry is a short biography with a one to two paragraph analysis of the teachings. Then–and this is the good part–a list of the major works, when they were published and sometimes which ones to start first.

*Thomas Goodwin was deep in with Cromwell, as was John Owen.
*Cotton Mather broke with his father’s eschatological method to something approaching millennarianism (430). While Mather’s suggestions on dealing with witches today might bother modern readers, those who’ve been on the mission field (or some urban areas in America) can probably attest to what he is saying. But more importantly, Mather denied the legitimacy of spectral evidence in court, pace the idiocy of Arthur Miller.

The sections on Scottish Puritans and the Dutch Nadere repeats most of Beeke’s works found elsewhere, namely *Puritan Reformed Spirituality.* 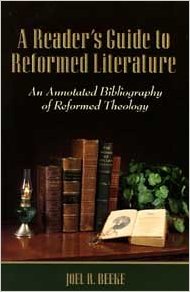 It is exactly what it purports to be: an anthology of the best post-Reformation works on the various loci of theology. Each chapter is about 2 1/2 pages and has Beeke’s running commentary on the best (and sometimes those to be avoided).

It’s not a criticism but an observation: the literature on church-state relations per Augustine can’t be complete without a discussion of R. A. Markus and Oliver O’Donovan.

Reading anthologies and commentaries on commentaries is actually quite fun.  This volume is highly recommended.

This isn’t an outline of the whole book, but of what I found most helpful.

The book is vintage Beeke. While not a collection of independent essays, most of them can be read independently, although the essays on the Erskines build on each other.  In this book the reader gets an outstanding (if sometimes limited) perspective on Reformed and Puritan spirituality.  Aside from some editorial hiccups, this book is a treasure.

The Holy Spirit is the bond that unites us to Christ. Excellent opening by Beeke. Places the internum testimonium Spiritus within the larger working of salvation, and not just as it relates to Scripture.

Calvin’s Paradoxes on Assurance of Faith

Life and Theology of Thomas Boston

Ames and the Marrow of Theology

My Tweets
Join 68 other subscribers